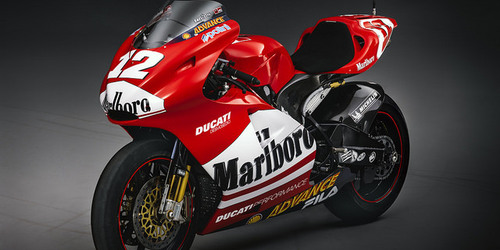 Ducati abandoned the Grand Prix racing scene at the beginning of the 1970’s, focusing attention on the 500 class – a 2-stroke championship incorporating engineering technology far afield to that present in Ducati’s 4-stroke production bikes at the time. In 2002 however, the rules were changed – handing priority to 4-stoke machinery, thus redeveloping the 500 class of World Road Racing Grand Prix into the new era of MotoGP.

Ducati is classically idolized for the use of L-Twin engine configurations, utilizing Desmodromic Valve Technology – the term Desmosedici is derived from the Italian pronunciation of Desmodromic Distribution with Sixteen Valves. Initially, Ducati pondered to utilize a ‘super-twin’ engine, taking full advantage of current regulations favoring the use of twin-cylinder machinery over 4, 5 and 6 cylinder versions – posing significant weight reduction in comparison. However, detailed analysis showed that a twin-cylinder engine would / could not produce enough power to rival larger power plants with a target in excess of 230hp.

Realistically, the only way to produce the desired power output would be through excessive increase in engine speed, a minimal stroke and an over-size bore diameter – undeniably, these incidences would almost certainly develop combustion inefficiency. Instead, the basis of a Desmosedici engine was to use two L-Twin in parallel, effectively producing the Double L-Twin configuration, which during operation would orchestrate two cylinders stroking at once – known as Twin-Pulse.

Due to this new development, Ducati announced its long awaited return to Grand Prix racing, design was started in early 2001, with the Prototype bike unveiled at the 2002 Italian GP at Mugello – this bike would become the GP3.

The owner of this machine hasn't posted any updates yet. Please check back later.