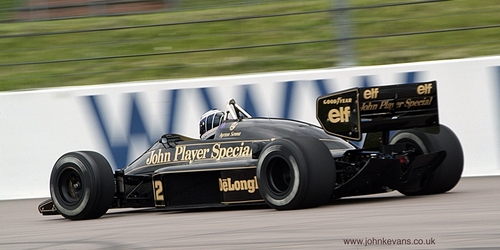 The Lotus type 98T was the last of the famous JPS cars produced at Ketteringham Hall. Driven by Ayrton Senna and Johnny Dumfrees it achieved significant success particularly in qualifying. The last of the unrestricted turbos the car was powered by the trail blazing Renault V6 engine in it's final EF15 configuration. With race power rated at just above 1000bhp and qualifying power estimated to exceed 1300bhp the engine proved remarkably drivable but suffered from a lack of fuel efficiency during the early part of the season. The car features several novel systems including driver adjustable ride height and water injection. Chassis 04 was the last Lotus to be painted in JPS colours and was driven in the second half of the 1986 season by Ayrton Senna. It started from pole position on four occasions and achieved several podium finishes.